Turkish Airlines recently confirmed a deal to become Chelsea’s new shirt sponsor, but were forced to delete their own tweet announcing the agreement in an embarrassing publicity gaffe.

However, the new deal is still likely to be in place for the 2015/2016 season, after Chelsea’s long association with Samsung, that has lasted since 2005, comes to an end. 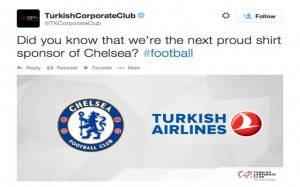