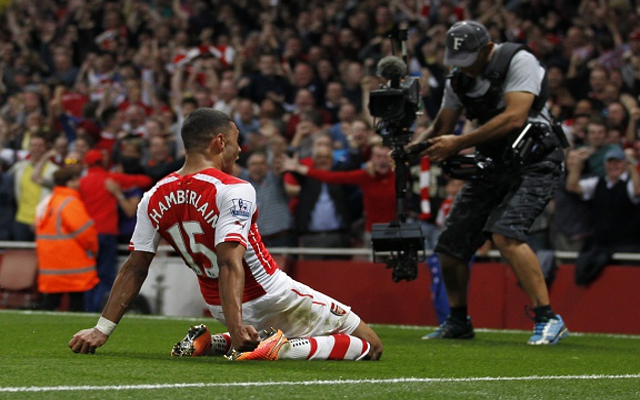 Alex Oxlade-Chamberlain believes Arsenal are more than capable of taking revenge on Chelsea after the 6-0 loss they suffered at the hands of their London rivals last season, according to the Mirror.

The Arsenal winger says his side can not only avoid another morale crushing defeat at Stamford bridge, but that the Gunners can come away with the win this weekend against league leaders Chelsea.

Arsenal fans will find it hard to forget their worst ever result against Chelsea last year, and Chamberlain is finding it just as difficult. The England international handled the ball on the line during the 6-0 defeat last time around, although Kieran Gibbs was wrongfully sent off in his place.

“It was a horrendous day. You would like to say it was one that you forget and don’t remember, but I’m sure it’s one that I’m going to remember for the rest of my life,” Chamberlain told ArsenalPlayer.

“They are big competition to us so we’ll be looking to go there and make a statement early on in the season. I definitely believe we can.”

There were high expectations for Chamberlain after his move from Southampton to Arsenal in 2011, and while he may not have reached those heights just yet, he looks to be on the verge of a breakout season with the Gunners.

Still just 21-years-old, Arsene Wenger doesn’t seem entirely sure of his best position just yet. He has been utilised in the centre of midfield at times, although his pace and direct nature lends very well to wing play.

With the potential this young man has Arsenal fans could very soon be seeing an Ox that is a vital piece of the Arsenal machine.