Manager Brendan Rodgers is already eyeing up potential targets for the January transfer window, who could all help bolster his ailing forward line. Here are the top five candidates: 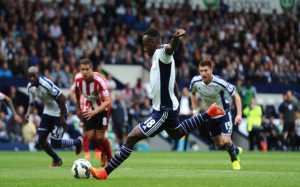 Liverpool could target West Brom’s starlet striker, who is likely to start against them today – you can read the full story here.

The 21-year-old Englishman is one of the hottest prospects in the Premier League, and is currently the top scoring home grown player in the division. The under-21 international has scored 14 Albion goals so far, five of which have come during the current campaign.