An internet poll constructed by the Daily Mirror has determined the eventual winner of the Jose Mourinho v Arsene Wenger fight, after the two manager’s clashed at Stamford Bridge on Sunday afternoon.

The pair squared up to each other 20 minutes into the game, which Chelsea eventually won 2-0 via goals from Eden Hazard and Diego Costa. And the Mirror has determined that Mourinho was most likely to have come out on top, with the Special One earning a narrow 53% majority. 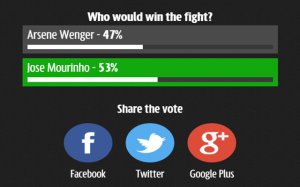 The incident occurred when Wenger disagreed with a tackle by Chelsea defender Gary Cahill, forcing the Frenchman to come over and confront Jose Mourinho. He believed that Cahill should have been dismissed for his rash challenge on Alexis Sanchez, for which he only picked up a yellow card.

Wenger pushed Mourinho in the chest before the pair were separated by officials. There was also no customary handshake between the two after the game, as Wenger departed down the tunnel soon after the final whistle.