When he arrived at Manchester United, Louis van Gaal promised to give every player he had a chance to prove themselves, and now that he has done that, he is well aware of the need for a huge clear-out.

United are improving – how could they not be having spent in excess of £150m this summer. But while they successfully brought in the likes of Angel di Maria, Radamel Falcao, Ander Herrera, Luke Shaw, Marcos Rojo and Daley Blind this summer, they failed to rid themselves of a lot of deadwood.

That will surely be a priority for the Old Trafford club as they bring themselves in line with Financial Fair Play regulations that will come into effect if and when they return to European football.

Here are 12 that could be on their way out: 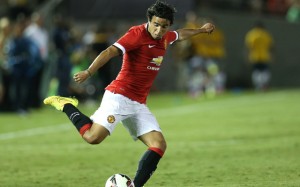 The Brazilian full-back has been one of the major villains in United’s defensive liabilities so far this season, and will surely be on his way out as soon as the club finds a suitable replacement.