AC Milan Sulley Muntari has decided to have his Lamborghini camouflaged in exactly the same style as former teammate Mario Balotelli has his Bentley – as revealed by this picture of Michael Essien.

The former Portsmouth midfielder’s car will have set him back around £200,000, and Essien was keen to make the most of the opportunity to snap a picture with it. 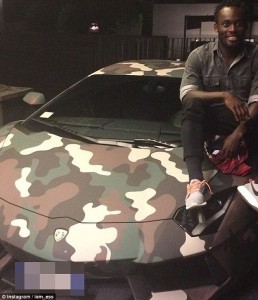