Barcelona have enjoyed a near-perfect start to the season…

Spanish giants and Barcelona have taken to Instagram to boast of their new record: Claudio Bravo has become the first goalkeeper in La Liga history to not concede a goal in the first 630 minutes of play.

The Catalans have won six and drawn one of their opening seven league matches of the season, and are yet to concede a goal.

Bravo replaced long-term number one Victor Valdes this summer, having signed from Real Sociedad after an impressive World Cup with Chile. 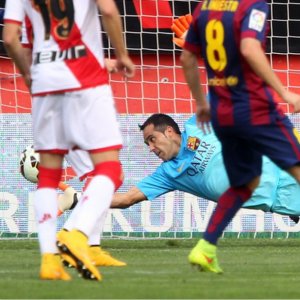