Liverpool have opened contract talks with England international midfielder Jordan Henderson, report the Express, after the former Sunderland man’s consistently good performances became one of few bright lights in a dismal opening few weeks of the season for the Anfield club.

Henderson has been a key player for Liverpool since Brendan Rodgers took over as manager of the club and has developed into one of the finest all-round midfielders in the Premier League – even adding goals to his game, as shown by the crucial winner against West Bromwich Albion at Anfield on Saturday.

Despite being derided for the huge fee that Liverpool sent in the direction of the Stadium of Light for his services, Henderson has silenced the doubters and become a star man for club and country, something that has led Anfield chiefs to open discussions over tying down his long-term future to the club.

Any new deal for Henderson would follow the five-year contract signed by star striker Daniel Sturridge last week, with rapid negotiations indicating that Liverpool are keen to ensure that the foundations of a team to bring success over the next few years are put in place for manager Brendan Rodgers.

Henderson can expect a hefty pay increase, as was enjoyed by Sturridge and is being offered to Raheem Sterling, cementing his position as one of the club’s key assets. 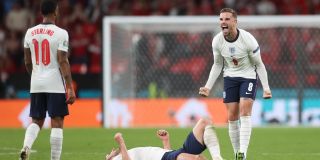