Luis Suarez was not amused by this selfie-chasing taxi driver…

Former Liverpool striker Luis Suarez looked distinctly unimpressed as his Saudi Arabian taxi driver requested a selfie. The Barcelona forward is yet to play in a competitive match for his new club, but is edging closer to the completion of his ban. He is expected to feature in a friendly in the country on Friday. 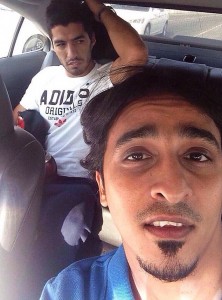