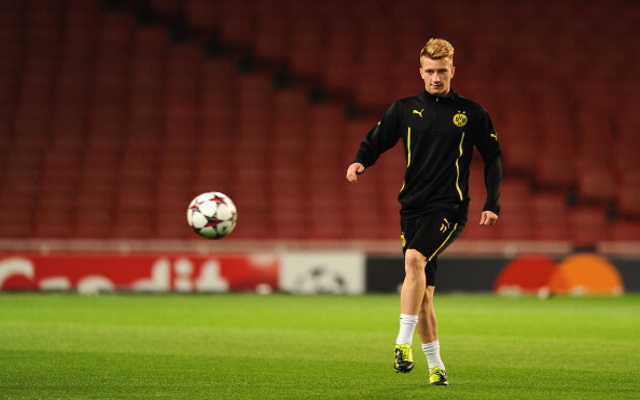 Arsenal could be set to bring their move to sign Marco Reus from Borussia Dortmund forward as they line up a £33m bid to bring him to the Emirates Stadium this January.

The Gunners are desperate for a new addition in attack after losing Mesut Ozil to a long-term injury, which could keep the former Real Madrid playmaker out for the next three months at least.

Reus has often been linked with Arsenal as well as a number of other top clubs, though it was widely expected that they and other teams would hold off until next summer to sign the 25-year-old when a £20m release clause in his contract comes into effect.

However, it is now thought that Arsenal’s desire to bring in a replacement for the injured Ozil, whilst also missing other big names in attack such as Aaron Ramsey, Theo Walcott and Olivier Giroud has persuaded Arsene Wenger to try his luck with a big-money bid for Reus in the middle of this season.

Arsenal may be willing to go as high as £33m to sign Reus as soon as possible, though it remains to be seen if Dortmund will be willing to part ways with such an influential player in January with little time to find a replacement.

Still, an offer of £33m for a player they would almost certainly lose for £20m just a few months later may well be tempting for the Bundesliga giants.