Maybe Arsenal aren’t in THAT much trouble after all.

Arsenal fans may be in a state of utter meltdown right now after it was revealed that playmaker Mesut Ozil is unlikely to feature until the new year, but some new stats have highlighted that things may not be so bad after all.

Since joining the club from Real Madrid, Arsenal have played 32 games with Mesut Ozil available and 13 without him in the Premier League.

Things look pretty good with him in the side, winning 56.2% of their matches. However, without him it increases to 61.5%.

With recent calls for the World Cup winner to be dropped from the squad following an indifferent start to the season his enforced absence may not be a complete disaster. 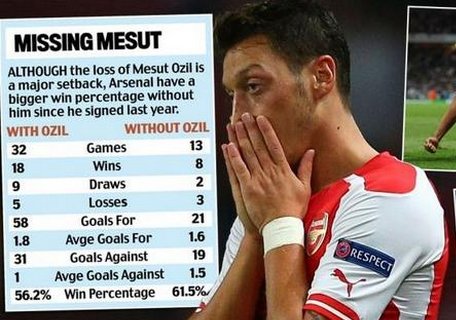