Landon Donovan is due to play in his final game for the USA this week, and although we all now know him as the cool and suave individual you see above, it’s not always been that way…

Donovan has been a well-known face in world football since signing for Bayer Leverkusen in 1999 when he was just 17-years-old, yet he was already a much-discussed hot prospect long before his move to the German giants.

He began his journey to becoming the greatest American player of all time playing in the American Youth Soccer Organisation for a club called Cal Heat. You can see from the picture below that from a young age he already showed signs of being media-savvy.

What went wrong between that picture and the next one is difficult to say. By the time he was 20 he was in the USA national side making his debut against Mexico – but whereas most players get more savvy to being snapped in embarrassing poses as they get older, the opposite seemed true for Donovan! 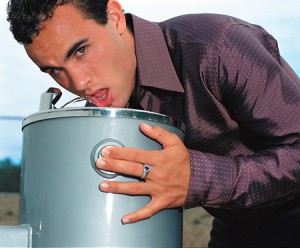