Who will step-up to replace Wayne Rooney in the future…

For several years now, Wayne Rooney has been viewed by many as England’s solitary world class player. The 28-year-old, who has 41 goals from 97 international caps, is now captain for both club and country, and is ready to lead the Three Lions into Euro 2016.

But by the time, qualification permitting, England travel to France for the tournament, the Manchester United forward will be 30, and by the next World Cup – in Russia in 2018 – he will be 32, and there is no guarantees that he will reach that competition.

Roy Hodgson and his coaches need to be considering who will by Rooney’s long-term replacement. Here are the top ten candidates for the premier striking role: 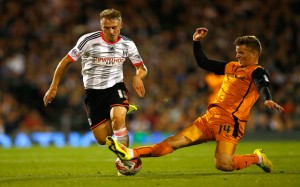 The 19-year-old has impressed in England’s Under 21 side this year, while he has also begun to establish himself in a Championship side with aspirations of returning to the Premier League – a bright prospect.