Are you ready for Mike Bassett: Interim Manager…

Fans of the 2001 football film Mike Bassett: England manager, can pay to have a speaking role in the film’s sequel, as part of a rewards scheme for the movie which is due for release in 2016.

Reports in the Daily Mail explain that the initiative, which is set up via crowd-sourcing website Kickstarter, welcomes pledges of anywhere from £5-£5000 with various rewards available – as demonstrated by the list below.

Ricky Tomlinson will be reprising his role as England boss Bassett, with filming set to begin in March 2015. In the new comedy, Bassett has fallen on hard times after a series of ill-advised and hilarious career moves, including stints in Germany and with the Iranian national team – who have mistaken him for QPR manager Harry Redknapp.

However, when England’s successful German manager gets another job just weeks before the World Cup, a desperate situation calls for Bassett to take over the reigns as interim boss. 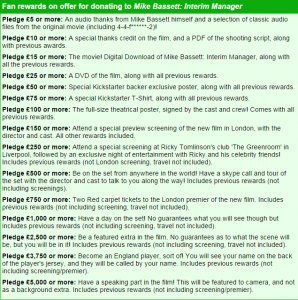