Reports in the Spanish press are claiming that Real Madrid are preparing to make a move for Manchester United stopper David de Gea, but are there better alternatives available for the Spanish giants.

CaughtOffside counts down the world’s ten best goalkeepers and comments on their chances of a move to the European champions. So hold tight United fans, we might be able to find a way for you to keep your talented young Spaniard: 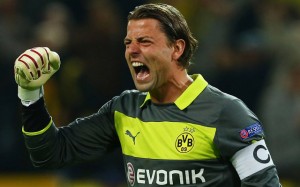 The veteran German stopper who has been with Borussia Dortmund since 2002, and will likely see out his career at the club.