Raheem Sterling has been regularly mocked on social media…

England and Liverpool winger Raheem Sterling has faced a hoard of abuse on social media, after he supposedly asked to be withdrawn from the Three Lions team to play Estonia on Sunday due to tiredness.

Here is just one example of Twitter based mockery, with an image captured of Sterling being driven by club and country teammate Jordan Henderson. Talk about building up a reputation for being lazy… 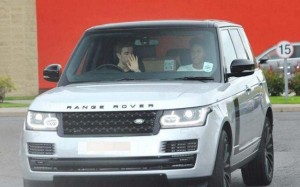