The Premier League has used the international break to launch a new campaign for its latest good cause: in this case bladder and kidney cancer.

The campaign itself, however, involves some truly unsettling photos of players in full kit using stadium urinals and staring solemnly into the camera.

West Ham, Liverpool, Southampton and West Brom have all thrown their support behind the campaign, which encourages men to check the colour of their urine, and visit a doctor if there ever appear to be traces of blood in it.

The Premier League’s good causes are often particularly male-orientated given the gender bias in match attendance, and this continues with the current campaign. The Daily Mail quoted Simon Morgan, the Premier League’s Head of Community Development as saying:

“The health of football fans across the country is a serious issue, with men more at risk of developing and dying from bladder and kidney cancer than women.”

The campaign is an admirable one and the advertising is very effective: it certainly won’t be easy to forget the haunting eyes of Jay Rodriguez as “Sammy Saint” stands awkwardly at the urinal behind him. 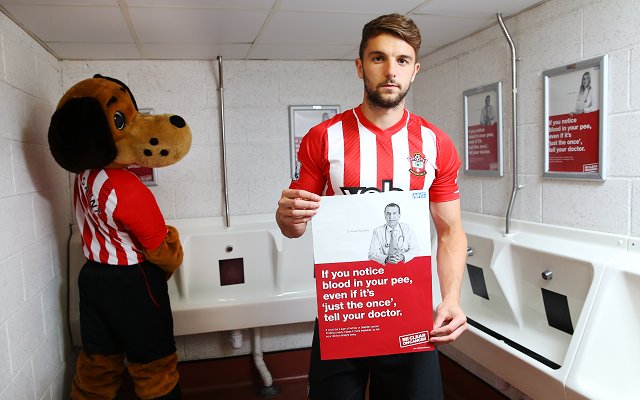