Some celebrations are good, some are bad and some are just plain stupid.

Arrogant Monaco left-back Layvin Kurzawa went a bit over the top after scoring a late goal for France’s Under-21s against Sweden on Tuesday night.

Kurzawa’s strike made the score 3-1 to Sweden, but France led the two-legged Euro 2015 qualifier on away goals.

Clearly believing that his nation were heading to through to the finals, Kurzawa proceeded to sprint around the field, mocking opposition players with his “see you later” celebration.

He got all up in the face of Swedish Manchester City striker John Guidetti – big mistake!

Guidetti then got his own back by mocking Kurzawa with his own celebration.

Later on, in the dressing room, the whole Sweden team got in on the act.

Scroll down to view pictures and a video of the madness. 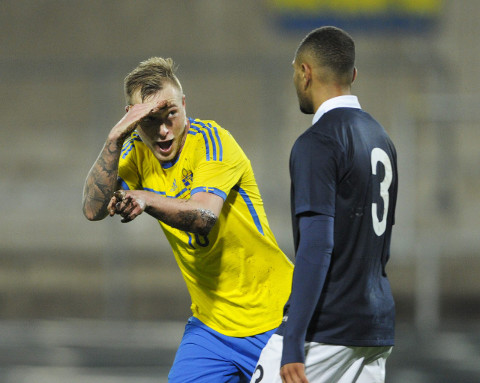