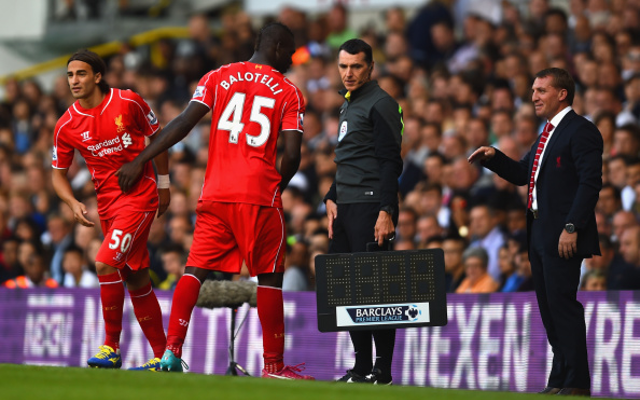 Liverpool striker Mario Balotelli has stated his belief that Brendan Rodgers’ tactics may be affecting his game this season after a poor start to life at Anfield since his summer move from AC Milan, according to the Independent.

The Merseyside giants brought Balotelli in as a replacement upfront for departing star player Luis Suarez, who moved to Barcelona in a £75m deal, though he has struggled to replicate the Uruguayan’s fine goalscoring performances in that position.

Balotelli has often been known for being inconsistent and not quite fulfilling his tremendous potential, and the Italian international feels that at the moment his poor form is down to playing in an unfamiliar lone striker role.

The 24-year-old has largely played as a support striker in a two-man attack throughout his career, and says he has been asked to play as the main centre-forward in the absence of the injured Daniel Sturridge.

“I have never been a real, out-and-out striker – I have always been someone who goes around the pitch,” he said.

“If it was my choice, I would always go with two strikers. It’s the way I like to play, but Brendan asked me to play as the first striker.”

Still, Balotelli also takes some of the blame for his unconvincing start in a Liverpool shirt, explaining that he is working on adapting his game to this new system and that he knows he needs to get into the habit of getting into the penalty area more.

“I need to get in the box more,” he said. “I don’t do it enough but it is something I am working to try to do more.

“I understand that when the ball comes from wide on the left or right I need to be in the box, otherwise there might be no one there at all.”