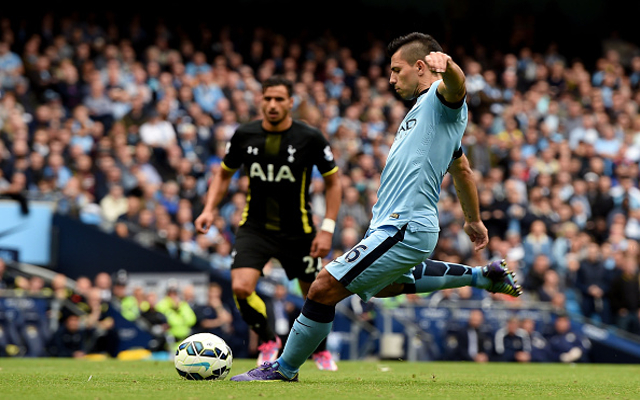 Argentine earns himself the matchball after superb display at the Etihad Stadium.

In a game jam packed with contentious incidents it was Argentine goal machine Sergio Aguero who made the biggest impact of all.

A mistake by Fernando led to a Spurs breakaway which ended with Christian Eriksen immediately leveling.

On 20 minutes Frank Lampard was felled in the box and Sergio Aguero confidently netted the spot-kick.

Amazingly ref Jon Moss gave Man City another penalty 12 minutes later but Hugo Lloris was up to the task and kept out Aguero’s effort.

A quarter of an hour into the second half and Roberto Soldado had won himself a penalty, though arguably there wasn’t much contact, before the Spaniard saw his penalty saved by the excellent Joe Hart.

Soldado wins the third penalty of the day… He takes it himself and Hart saves! #mancity #spurs #hart #save https://t.co/WxCU52inap

Sergio Aguero was pulled back by defender Fazio, who was ordered off, and he made no mistake to secure his hat-trick with the fourth penalty of the match!

ANOTHER penalty! This time Aguero gets his hat-trick! Red for Fazio. #mancity #spurs #aguero https://t.co/MVRB6kiP5Z

Aguero showed once again why he is one of the most feared strikers in world football, smashing home his fourth to seal Man City’s 4-1 win over Tottenham.