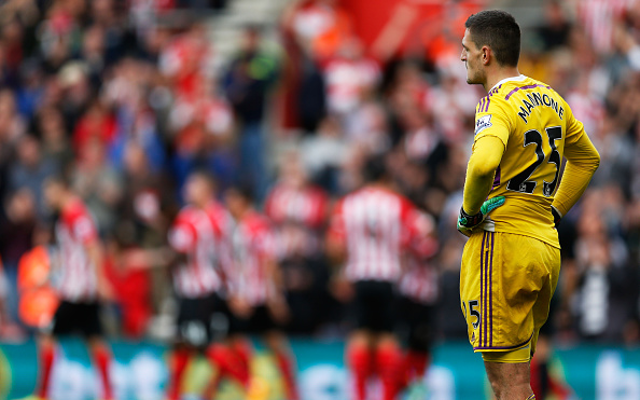 Sunderland star admits hopes to pay back fans.Sunderland goalkeeper Vito Mannone admits he hopes to persuade fellow team-mates to reimburse the club’s traveling supporters after the embarrassing 8-0 defeat to Southampton this weekend, the Daily Mirror reports.

The Italian shot-stopper was in goal as the Black Cats let in an incredible eight to the Saints this Saturday, and says he understands it is difficult for the fans to take after a long journey to the St Mary’s Stadium and back home again.

Mannone’s first-team place may now be in doubt after he hardly covered himself in glory in this match, with speculation that he will be dropped for next week’s game against Arsenal, though he has been quick to praise the club’s fans for their continued support.

“It is a low point for everyone,” he said. “I will ­personally talk to the team to see if it is possible to pay for our fans’ tickets and their trip. It is difficult for us but it is difficult for them as well.

“They are special fans – we are really lucky to be at this club and, if it was me, I would ­probably not have reacted in the same way as them.”

This result is up there with the biggest Premier League thrashings of all time, and puts Sunderland in real trouble again this season after they battled hard against relegation last term, finding a strong run of form late on in the campaign to secure their top flight status.

This will hardly fill the team with confidence after a poor run of results, with manager Gus Poyet admitting it was his worst day in his footballing career.