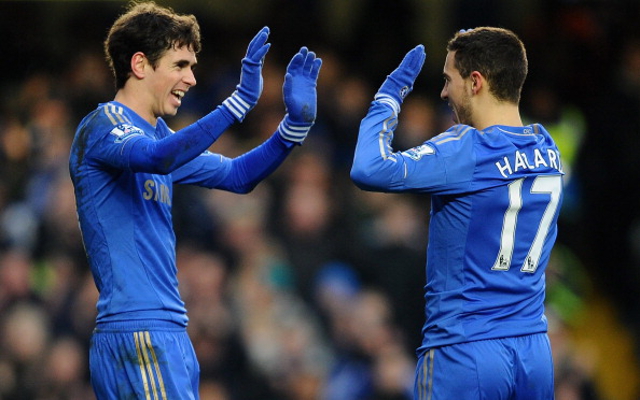 It was a comfortable night for Chelsea in the Champions League…

Chelsea scored a comfortable victory against Slovenian side NK Maribor on Tuesday, as goals from Loic Remy, Didier Drogba, John Terry and Eden Hazard (2), along with an own goal, handed the Blues their biggest ever victory in the competition.

Terry played the role of Cesc Fabregas for the first, picking out a cracking pass from the halfway line to send Remy away. The Frenchman may have been just offside, but he cut inside and curled home a low shot from 20 yards.

The second goal came from the spot. Willian saw his pass hit the arm of Ales Mertelj and a penalty given, with Drogba stepping up to convert, just as he did in the 2012 final against Bayern Munich – the last time he found the net for the Blues.

Just before half-time, Jose Mourinho’s side then put together a wonderfully flowing move. Drogba cleared a Maribor corner, Eden Hazard dribbled it from halfway and waits for Cesc Fabregas to arrive on his shoulder. Fabregas looks up and picks out Terry in the goalmouth, who has made a 70-yard run and can’t miss.

Number four was an own goal. illian fed in left-back Filipe Luis on the overlap, who showed so much composure to skip over a tackle and take all the time he had before rolling over a cross. Eden Hazard retrieved it, put it back across goal and it went in off the heels of Mitja Viler.

Hazard slotted home number five, also from the spot – after the visitors at missed the chance to reduce the deficit, having also been awarded a penalty. Marko Suler had his hands on Branislav Ivanovic, who went down elaborately, but the penalty was given. Hazard didn’t even look up at the keeper, instead just picking his spot and sliding the ball into the net.

Hazard also completed the scoring with the best goal of the night. Nathan Ake picked up the run of Hazard with a quarterback style pass over the top, Hazard’s touch to bring it down was fantastic, and he cut inside the last man before curling into the roof of the net.