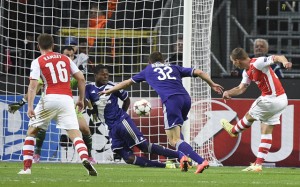 Aresenal are now just three points away from guaranteed qualification, after turning around their final game against Anderlecht, as well as their entire qualification campaign. Their first group stage match could not have gone much worse, losing by a flattering 2-0 scoreline against Borussia Dortmund. The Gunners were much improved against a woeful Galatasaray side, with the 4-1 win taking them into second place.

With two minutes remaining against Anderlecht, they were trailing 1-0 and about to drop back down to third. But despite a poor performance, the Gunners tenacity earned them a dramatic late reprieve. Kieran Gibbs and Lukas Podolski struck in quick concession, and suddenly the North London side had their second win of the group stage, and a five point cushion on qualification with just three games remaining.