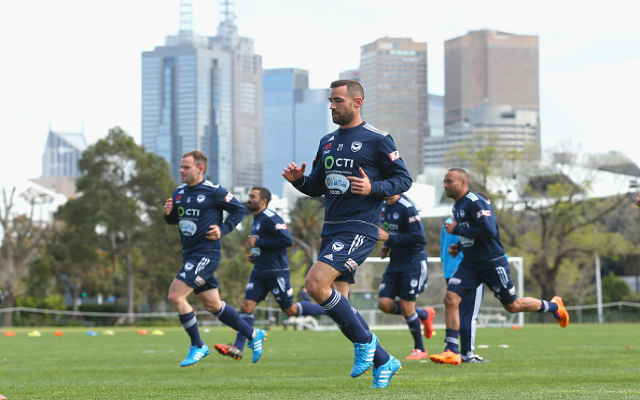 Carl Valeri has offered Melbourne City some advice after the announcement of David Villa’s imminent departure.

Carl Valeri has fanned the flames ahead of Saturday’s Melbourne derby, with the Victory midfielder having a cheeky dig at City over the departure of star attacker David Villa.

City announced on Wednesday that the Spanish World Cup-winner will leave Australia for New York after round four, with plans of a return unknown.

Speaking to the media after training on Thursday, Valeri claimed he was unaware of the Spaniard’s impending return to the US, but made sure he gave Melbourne City some advice for the future.

“Maybe you’ve got to read the fine print in the contract, I don’t know about that,” he is quoted as saying by Goal.com.

“He’s bought a spotlight to the A-League and good on him. He’s got to make his personal decisions regardless of what happens in Australia.

“I think they knew before hand, I can’t comment too much because I don’t know.”

A sell-out crowd of 47,000 is expected at Etihad Stadium for Saturday’s derby.