The latest FIFA rankings have been released, with a new leader in the race to be the best team in the CONCACAF region.

Costa Rica are the new leaders following a great World Cup campaign. Their domestic teams’ CONCACAF Champions League performances this season have only reinforced the view that the nation is on the rise.

SEE MORE
MLS Goals – Where to MLS goal scorers come from?
Defoe mum – Player’s mother is too influential according to Toronto
Paulinho Transfer – The Spurs midfielder looks set for a return to Corinthians

The USA have slipped to third, while Panama are fifth.

You can see the top ten nations in the image below. 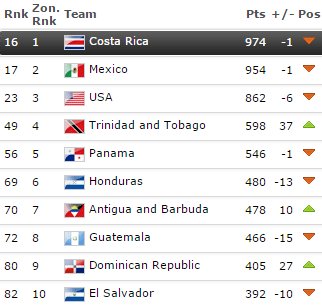