Nine key stats regarding the rivalry between Barcelona and Real Madrid…

Barcelona take on Real Madrid tonight, with both teams coming into El Clasico in red hot form. The Catalans are unbeaten and yet to concede a goal during their current league campaign, while Madrid have won their last five matches, scoring 25 goals in the process.

Madrid showed their quality as they ruthlessly dispatched Liverpool in the Champions League on Wednesday, and now sit top of their European group with three wins out of three. Barcelona beat Ajax 3-1 in their last outing, and sit second behind PSG.

Earlier today, BBC Sport revealed nine surprising stats relating to Europe’s biggest fixture, which are now counted down for you here on CaughtOffside: 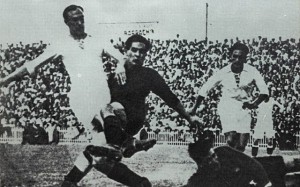 Saturday’s Clasico will be the 229th competitive meeting between the teams in all competitions, with Real holding an overall 91-89 lead, while 48 games have been drawn.