Today’s papers are linking Manchester United with a move for Zenit St Petersburg’s Argentina defender Ezequiel Garay, as they look to shore up their defensive issues, while Real Madrid midfielder Sami Khedira, 27, has dropped his wage demands to £80,000-a-week in order to ensure he seals his proposed transfer to Arsenal.

But of course, they’re are plenty of players we’d love to see come to the Premier League in January – world class players that every neutral could appreciate. CaughtOffside counts down the top twelve: 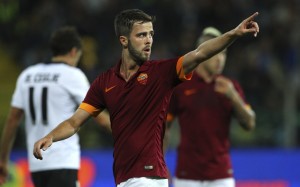 The Bosnian playmaker has been one of the key players in Roma’s success over the last 12-18 months, and has caught the attention of Manchester United as they seek to remodel their midfield.