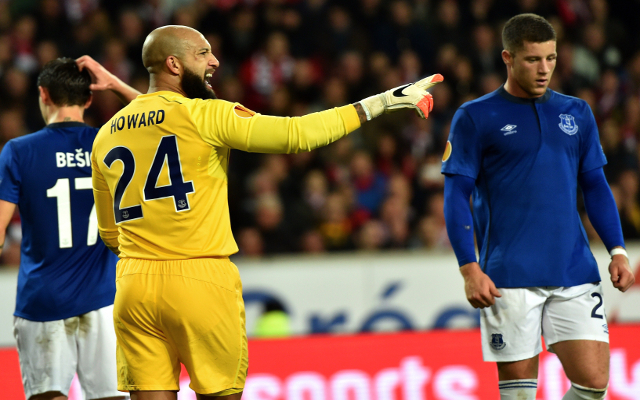 Everton boss Roberto Martinez has moved to quash talk of a possible exit of youngster Ross Barkley by confirming that the England international’s Toffees contract contains no release clause according to the Sunday Mirror.

The Goodison Park side are steadfastly sticking to their £50m valuation of the 20 year old though prospective suitors Man City may not consider such a price-tag as much of a obstacle given their penchant for big spending.

Man City will make a move for the impressive midfielder next summer, even though Barkley has only recently signed a new four year deal with his Merseyside employers.

It’s a move that could make or break Barkley’s career, not least as other top stars have made similar moves to ‘bigger’ clubs only to see their first team chances limited. Indeed Man City moves certainly impeded the progress of a number of such players, most recently the likes of Jack Rodwell and Scott Sinclair, would the cultured midfielder perhaps be better off staying put at a resurgent Everton?

On the subject of a possible exit Martinez stated;

“There is no buy-out clause,”

“In fact, there are no buy-out clauses in any of our contracts. The only one we had was with Marouane Fellaini, and that wasn’t triggered so it didn’t matter.

“So I’m not going to be worried about other teams’ interest, because there will always be interest in talented young English players like Ross and also John Stones.

“With the club that has been mentioned, it doesn’t make any difference to them whether a player has one or five years left on his contract – because they think everyone is there for them to buy.

“But the difference is that we have gone past the stage where we have to sell. This is a fantastic moment for us financially and all the ­decisions we take now are purely football decisions.

“Of course, the nature of the game means that even a club like Manchester United can lose Cristiano Ronaldo, but we don’t need to sell because of finances.”

“What I will say is that I remember Michael Owen leaving Liverpool to go to Real Madrid to win titles – and Liverpool then won the ­Champions League. Sometimes players need to be careful what they wish for.”

Barkley recently returned from injury to put in a superb goal-scoring man of the match display against Aston Villa last weekend.