Check out these stats comparing Manchester United’s David de Gea and Chelsea’s Thibaut Courtois. Who comes out on top?

Two of the most in form goalkeepers in the Premier League will be at opposite ends when Chelsea face Manchester United today, and with the ability possessed by both they could easily be the deciding factors when the two sides meet.

Chelsea are looking dominant this season and currently sit five points clear at the top of the table with a game in hand.

Manchester United have been somewhat erratic but there is no denying they have a number of world class attacking players who could cause Thibaut Courtois some serious problems.

With both players still in the early stages of their careers, there is plenty of room for improvement. Who has been the star performer this season so far though?

Here are some stats comparing the two keepers courtesy of Squawka: 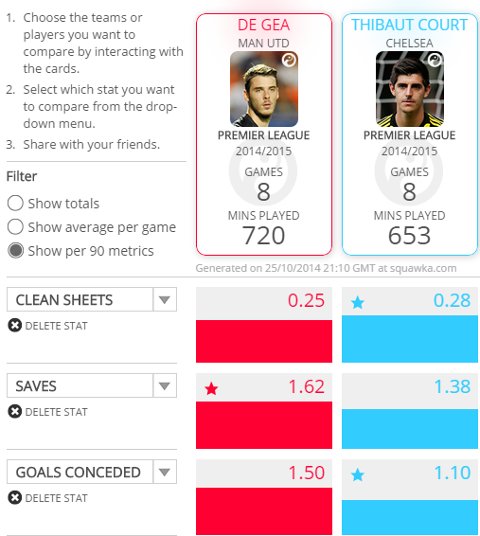 The Chelsea shot-stopper has narrowly kept more clean sheets and conceded far fewer goals, but with United’s defensive problems this season that task would probably prove far more difficult for the Spaniard.

David de Gea has made more saves, but has also faced more shots than his Belgian counterpart. 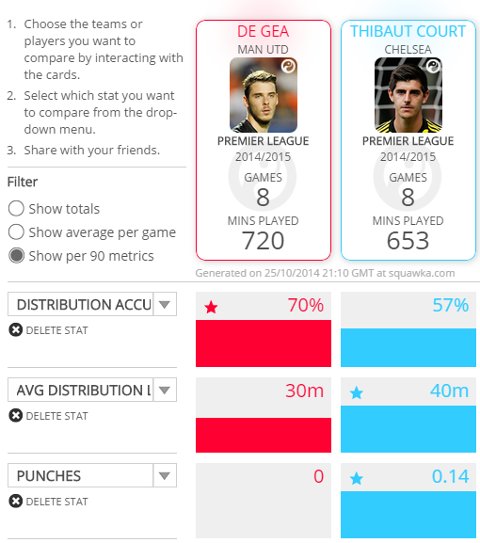 Courtois may distribute far further up the pitch compared to the former Atletico Madrid man, but his accuracy is nowhere near as impressive.

De Gea’s throwing and kicking has always been a superb weapon for United, and is vital when Louis van Gaal’s side are looking to counter attack.