Everton and England defender Phil Jagielka has laughed off speculation that he is in fact the Premier League’s fastest player. The 32-year-old posted a link to the Daily Mail story on his Instagram account, along with the caption: “Ha ha ha ha ha!”

The source states that Jagielka has recorded the fastest sprint of any Premier League player so far this season, with EA Sports tracking data shows he hit 35.99kmh against Leicester in August. 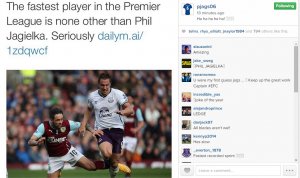