FIFA, along with France Football, have announced their 23-man shortlist for the next Ballon d’Or prize, and surprisingly, there is only one Premier League player amongst the potential winners.

According to FIFA: “The list of 23 male candidates has been drawn up by football experts from the FIFA Football Committee and by a group of experts from France Football.”

The list will be whittled down to just three names on December 1st, with the winner being announced on January 12, 2015 in a ceremony held in Zurich, Switzerland.

Germany World Cup winners, Thomas Mueller, Manuel Neuer, Phillip Lahm, Toni Kroos and Bastian Schweinsteiger all have a chance, though it’s entirely possible that the award will go to either Lionel Messi or Cristiano Ronaldo.

Meanwhile, Gareth Bale is the only British player to make the cut, but several Premier League players including Eden Hazard, Angel Di Maria and Yaya Toure are all included.

Diego Costa and Thibaut Courtois, both now at Chelsea is on the list, but their inclusion is based on what they did for Atletico Madrid. 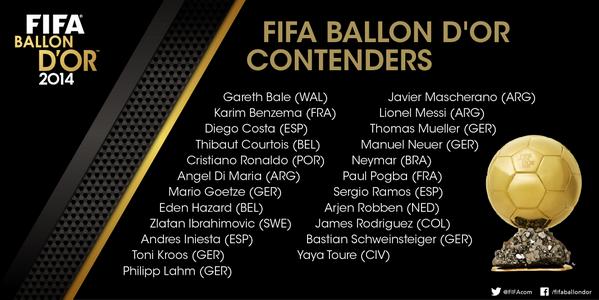 The following names are also in the running for Coach of the Year: