Reports in the Sun are linking Southampton with a £10m move for Tottenham’s England Under-21 forward Harry Kane. Another young Englishman, Saido Berahino, 21, has recently been compared to Wayne Rooney – and has been targeted by both Liverpool and Spurs.

The pair are among a host of impressive Premier League players aged 21 or under. With that in mind, CaughtOffside counts down the top ten young players currently playing in England’s top division: 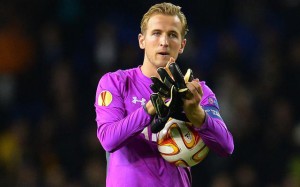 The Spurs striker is steadily becoming a more intimidating presence up front, but perhaps still needs to work on his keeping!