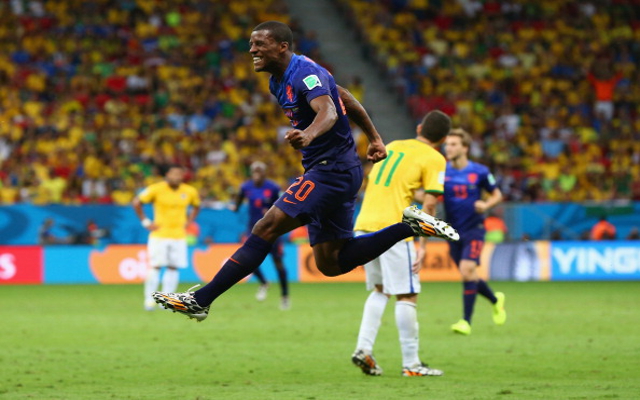 Arsenal and United in pole position to land youngster.

Arsenal and Manchester United could be in a strong position to sign highly-rated PSV midfielder Georginio Wijnaldum next summer, according to the Daily Express.

The 23-year-old has been one of the most impressive players in the Eredivisie in recent seasons, showing a great eye for goal from midfield in a series of all-action displays for his club.

Despite his relative youth, Wijnaldum was made captain of PSV last season and already looks like a top class player in the making, who is not one to shy away from big games or responsibility.

Arsenal and United are now thought to be on alert after the player himself admitted he is keen to make the step up to the next level, with strong suggestions that he could be set to move on from his current club next summer.

A move to Old Trafford may be the most likely outcome, with Louis van Gaal known to be a fan of the youngster, whom he used frequently during his time in charge of the Netherlands national team.

Wijnaldum was on target for the Oranje as they beat Brazil 3-0 in the World Cup third-place playoff this summer, and may be keen to link up with his old manager again.

“Next summer would be a great time to take the next step,” he is quoted as saying.

“PSV also know that I am keen to play abroad, I am the age for it. Although I like it here, I do not want to become too old to go abroad, because I want to play there for a few years.”