Chelsea manager Jose Mourinho was openly disappointed with the performances of some of his ‘fringe’ players on Tuesday evening, as he rotated his squad for the 2-1 Capital One Cup victory over Shrewsbury Town.

The Blues struggled against their League Two opponents, and needed a late own goal to secure their berth in the quarter-finals – with Mourinho saying ome of his Chelsea players did not impress enough to keep their place in the side.

“I expect people that have not been playing a lot to raise their level and create problems,” said the manager. “I love problems of choice, but it’s easy to choose my team for Saturday.”

So would the Special One be more impressed with this potential starting XI? Made up of players from other Premier League clubs, currently struggling to secure a spot in their respective teams. 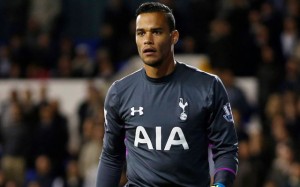 A summer signing from Swansea City, who is stuck behind Hugo Lloris in the pecking order at White Hart Lane.