Arsenal’s resident joker Lukas Podolski takes every opportunity he can to have fun, and this might just be one of his best jokes yet.

The German forward posted a picture on Instagram of Walcott and himself on the bench, with a truly fantastic caption.

“Theo said to me, ‘Lukas, what happens if the pitch gets flooded with rain?’ I said, ‘the teams bring on the subs!’ #Poldi #Theo #Aha #AFC #Fun #Smile #EnjoyLife #Redarmy 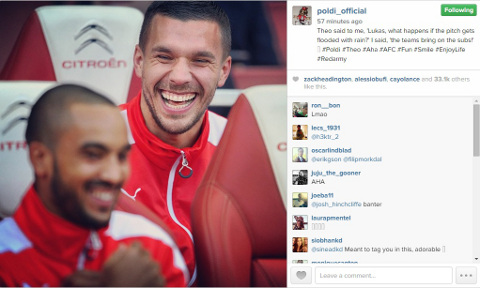 It’s one of those jokes that is so horrendously bad that it’s actually quite good. Well done Poldi!