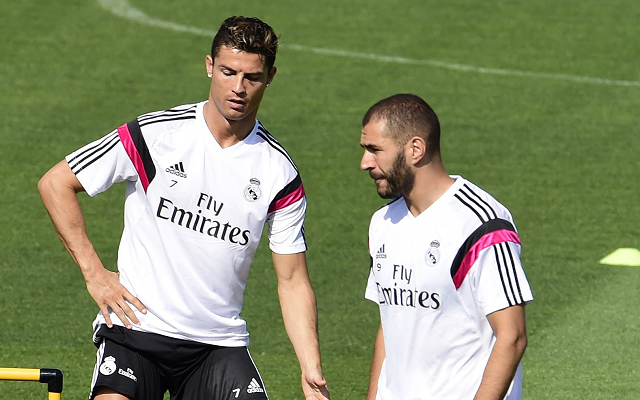 See which top scoring striker has been taking a leaf from Cristiano’s book.

Karim Benzema’s Real Madrid record is sensational: his Champions League goalscoring rate is 41 goals in 68, behind only Ruud Van Nistelrooy and Lionel Messi.

This season in particular, the Frenchman has stepped it up a level, and he’s outscoring even the great Cristiano in the competition, and he scored in both of Madrid’s games against Liverpool.

According to Marca, this improvement is no coincidence. The Spanish paper claim that the striker’s improved work rate and speed are a product of a new-found focus off the field. The extra gym sessions he’s been putting in with Cristiano have resulted in more goals and fewer injuries.

“Karim gets to Valdebebas [Real Madrid’s training ground] very early, following Cristiano’s example. Stretches, physio, weights and some cardio work in the gym before hitting the training group,” the Spanish paper reveals. “The player that arrived at Real Madrid has increased his muscle mass… but even with that he is five kilos lighter.”

Benzema’s close ally at the Bernabeu has always been Zinedine Zidane, but even with his mentor suspended, Benzema has turned the opinion of the crowd. The famously picky Blancos fans wanted Benzema out after some uncertain performances last year.

“Carlo always had faith in me, as did the president. The whistles aimed at me were only because fans expected a lot from me. I’ve been whistled at the Stade de France before too. I don’t know if they’ll whistle at me again, that’s just football, but I always try to do my best”.

The striker fought off the challenge of Higuain to claim the undisputed number one spot at Madrid, and is now fulfilling the incredible potential that brought him to Spain in the first place. Benzema is still only 26, and if he keeps training with Ronaldo, there’s no limit to how good he can get.