Sergio Aguero made a welcome escape from his Manchester City struggles by watching the Dallas Cowboys defeat the Jacksonville Jaguars in the third and final game of the NFL International Series at Wembley.

The in-form Argentine striker has been unable to prevent his club’s decline this season, but was all smiles as he posed for this picture with Cowboys kicker Dan Bailey, and his son Benjamin. 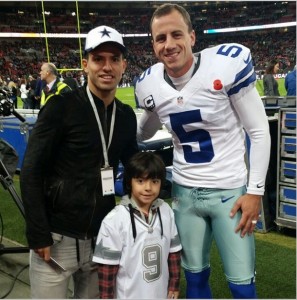