Alexis Sanchez was all smiles as he modelled the Gunners Christmas jumper. Arsenal are raising money for their global charity partner ‘Save the Children’, and their Chilean star was quick to give it the thumbs up.

The £30m summer recruit was shown in the Daily Mail, posing in the Gunners’ red Christmas sweater, which features a football snowman, while a cream version featuring a reindeer in a red Gunners’ scarf was modelled by Arsenal Ladies pair Rachel Yankey and Danielle Carter.

Twenty per cent of proceeds from the jumpers’ sales will go to the Arsenal Foundation’s global charity partner ‘Save the Children’, and will be shown off on the aptly named ‘Save the Children’s Christmas Jumper Day’ on the 12th December.

Having previously plied his trade in Spain and Italy, the Chile international perhaps won’t be used to the cold, chilly English wintertime and may find the jumper comes in handy as he enjoys his first Christmas in North London. 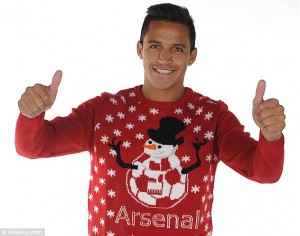 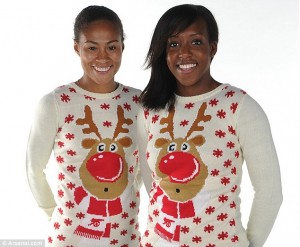