But former club Southampton haven’t made any.

Liverpool thought they were signing rock solid centre-back this summer when they brought in Dejan Lovren from Southampton, but the move has back fired on them somewhat as he has proved to be the most error prone defender in the Premier League this season.

The former Lyon man was one of three players that the Reds pinched from St. Mary’s in the summer, and while he was touted as a future captain in some quarters, he hasn’t quite lived up to that billing just yet.

And the worst part about the numbers is that former club Southampton have yet to make a single defensive error as they keep the pressure on Chelsea in second place.

Liverpool’s defensive woes have been made worse by the fact that Martin Skrtel and Alberto Moreno have not been solid either, each committing their fair share of errors along the way. 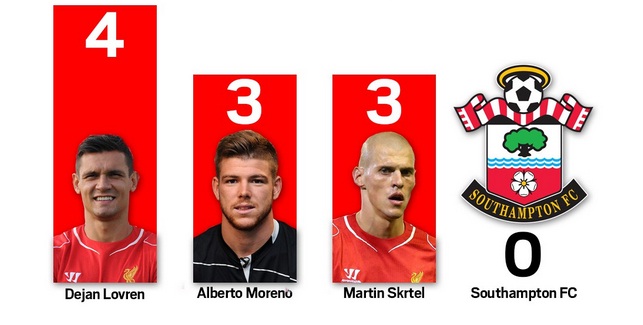 A case can be made to say that Lovren still needs time to settle into his surroundings at Anfield, but he needs to do it quickly if the Reds are to have any chance of salvaging anything from the current campaign.

(Numbers courtesy of Squawka and The