La Liga has regularly been a happy hunting ground for Premier League teams looking to bolster their squads, and with the likes of Arsenal, Liverpool and Manchester United all struggling to replicate the form their fans expect so far this season, it seems safe to expect more of the same in the upcoming January transfer window.

Here are the top ten superstars from the division that have been linked with moves in recent weeks: 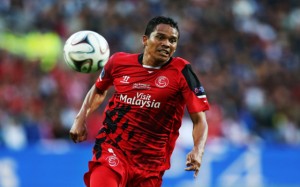 The free scoring Colombian has been targeted by Arsenal and Everton, but is believed to be happy at current club Sevilla.