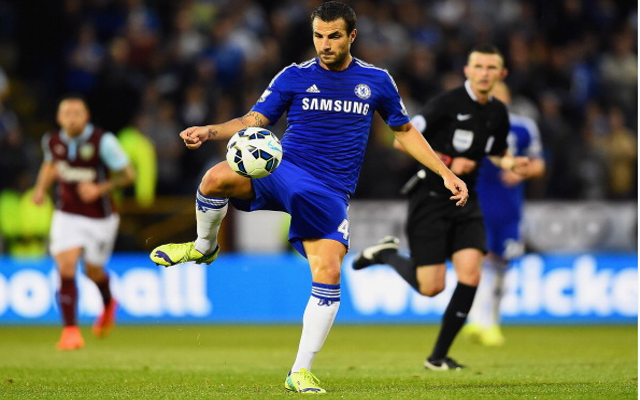 Fabregas should be fit for the Blues’ next match.

Chelsea midifelder Cesc Fabregas will be fit to face West Bromwich Albion on November 22, according to reports in the Guardian.

José Mourinho told the press that the Spaniard had played against Liverpool despite a mild hamstring strain, and the player has since pulled out of his national team’s squad for their upcoming games.

However, Fabregas looks set to be fit for the Blues’ game against the Baggies next Saturday.

Vicente del Bosque, quoted in the same Guardian article, seemed to indicate some doubt on his part over the extent of the injury:

“[His] muscle seems all right, but he complains and he is the best doctor,” del Bosque said

Fabregas’ teammate Diego Costa has also pulled out of the Spain squad. There have been no updates on the severity of his injury.

The West Londoners are undefeated this season, and sit four points clear at the top of the Premier League going into the international break.

With an important Champions League game against Schalke 04 in Germany coming just three days after the West Brom game, Mourinho will want Fabregas fit and firing, and will be relieved he now has a week to recuperate.