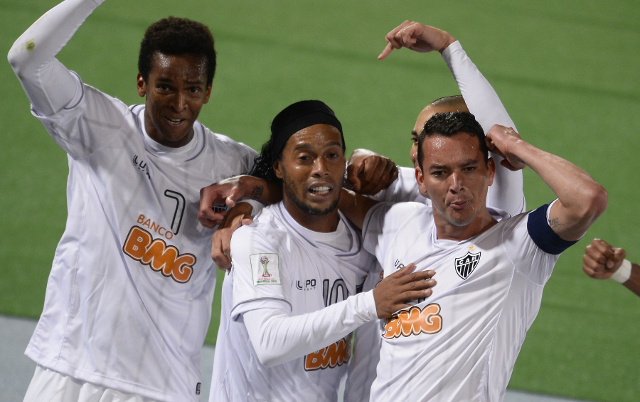 Ronaldinho only signed for Liga MX side Queretaro this summer, but there are already reports about an exit.

Ronaldinho has impressed in the Liga MX. While his work-rate has been almost zero, his touch and vision has put Queretaro within touching distance of a place in the post season.

SEE MORE
Worst Copa America Teams – Argentina are the best, but who are the worst?
South America Derbies – What are the biggest matches in South America?
Nacional Flag – The biggest ever flag in a football stadium

With a game to go his side are one point outside the play-offs, though with six teams separated by two points there is a good chance ‘Los Gallos Blancos’ will qualify.

Nonetheless Ronaldinho is rumoured to be unimpressed with the situation. Queretaro are not one of the Liga MX’s best sides – only surviving relegation two years ago by the skin of their teeth and almost being thrown out of the league last season for financial irregularities.

MLS side LA Galaxy are reportedly keen on a move. They have a reputation for signing globally recognisable names, and bringing in Ronaldinho would be a big coup for both themselves and US football in general.

However, Queretaro sporting director Adolfo Rios has moved to shoot down reports. In a press conference today he left onlookers in no doubt, saying “These rumours are baseless, he’s happy here, he has a contract and he’s shown no interest in leaving”.

“We were totally surprised” – Ronaldinho attempts to explain passport confusion that landed him in prison April 27, 2020 15:11
FC Barcelona

Photos: Luxury hotel that Ronaldinho is under house arrest in after prison release April 11, 2020 16:15
FC Barcelona