England and Manchester United captain Wayne Rooney will be looking to take a step closer to being the first Three Lions player to make it to 50 international goals.

The 29-year-old will continue to chase Sir Bobby Charlton’s of 49 when his country take on Slovenia on Saturday. With still several good years left in him, check out the list of players Rooney still needs to pass to become England’s all-time top scorer. 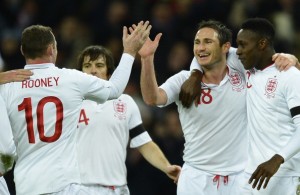 Scored 29 goals in 106 games, but never found the net in a World Cup, not including his controversially ruled out strike against Germany in 2010.