Radamel Falcao is in optimal condition ahead of Manchester United’s match with Arsenal, according to Colombia boss Jose Pekerman, who is quoted by the Daily Express.

The United forward has been absent in recent weeks with a calf knock but Pekerman says he’ll be ready to play, despite him not featuring in Colombia’s 2-1 win over the USA at Craven Cottage on Friday.

Pekerman said: “There is no doubt he is in optimal condition. He’s recovered very successfully. He done everything perfectly. This is a small muscular injury, it is different to the knee injury before the World Cup.

“He’s in a good condition and could be ready for Arsenal. He hasn’t even started yet. He will be one of the best players Manchester United have had and will break a lot of records in England.”

Falcao, who has scored just once for United so far, posted a message on Instagram this afternoon on his way back to Manchester. 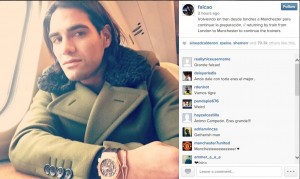