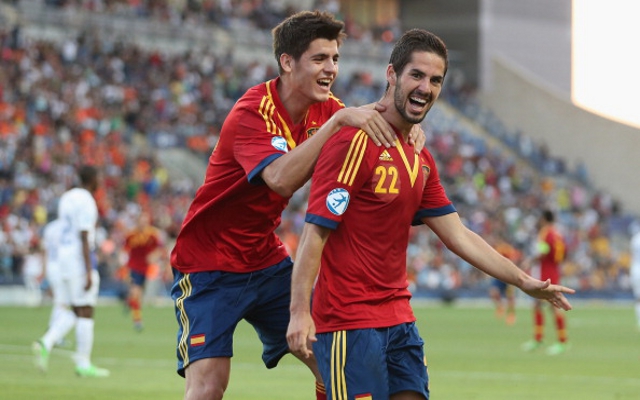 Spain’s qualification campaign is well and truly back on track.

Vicente del Bosque’s Spain side seem to have a spring back in their step following last month’s shock Euro 2016 qualifying defeat to Slovakia, with La Roja breezing past Belarus 3-0 in a game played in Huelva to celebrate the 125th anniversary of Spain’s oldest club Recreativo de Huelva.

From the outset it was the hosts who monopolised possession and worked a mediocre opposition side around the pitch, despite the loss of Premier League trio Diego Costa, Cesc Fabregas and David de Gea through injury.

It seemed to be just a matter of time until a goal came and, when it did, it was a thing of beauty courtesy of exciting young Real Madrid talent Isco, who picked the ball up on the edge of the box and sent a bending shot into the postage stamp at the top right hand corner of the Belarus goalkeeper’s net:

There was a certain predictability to the floodgates opening and it took just moments for Spain to double their lead with another long range belter – this time from the unlikely source of Barcelona midfielder Sergio Busquets, whose low shot evaded the goalkeeper at his near post:

Having got a two goal lead Spain saw fit to keep the ball and frustrate their Eastern European visitors, although chances were squandered by Pedro and Paco Alcacer to extend the lead.

A third goal would come for the Spaniards, however, and it was Barcelona winger Pedro who got it – a neat passing move allowing him to cut inside and smash the ball into the roof of the net with his weaker left foot:

Despite the fact that group leaders Slovakia once again won, hammering FYR Macedonia in Skopje, La Roja will be confident of overhauling Marek Hamsik and his side by the time the qualification campaign has drawn to a close.