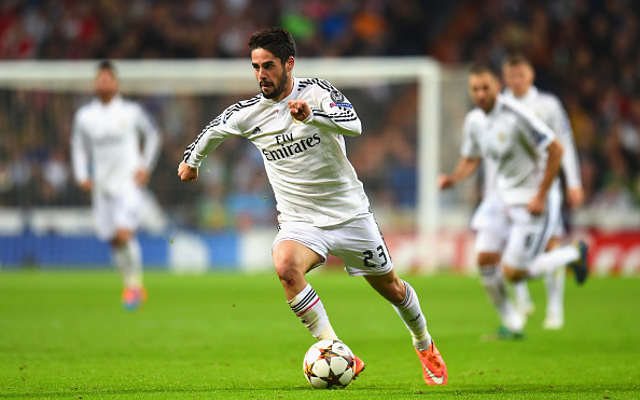 Arsenal are ready to make a big money move for Real Madrid attacker Isco according to the Metro.

The Gunners are ready to match the £40m offer Man City are set to make for the 22 year old in January and one wonders if the Spanish international will consider leaving the Bernabeu for pastures new when the transfer window reopens.

The former Malaga man had a decent first campaign at Real Madrid but has been playing second fiddle to Gareth Bale following the arrival of James Rodriguez, which has left Carlo Ancelotti with something of a selection headache.

Whilst Isco impressed during Bale’s recent injury lay-off it’s fairly likely he will be warming the bench again now that the Welsh international is back and if this is the case then by January he may be considering his options.

Man City boss Manuel Pellegrini, who knows Isco well from their shared time at Malaga, may hope to win the race for the attacking midfielder should he become available and it’s not entirely obvious as to why Arsenal would be willing to fork out £40m for a playmaker.

Wenger has a fair few similar players to Isco in his squad and Arsenal fans would no doubt prefer funds were invested in areas of more of obvious need of improvement.

Isco has scored 12 goals and provided 12 assists in 69 appearances for Real Madrid.