Azzurri seal 1-0 win in friendly against Albania on Tuesday…

All the latest headlines from the newspapers in Italy as Italy boss Antonio Conte is frustrated and unhappy with various aspects of the Italian game.

– Gets shot of Balotelli definitively: “I don’t have time to change him.”
– “Nobody helps us, I can’t go four months without seeing the players.”

– Cerci, Okaka and Acerbi are good news for the CT. Italy beat Albania 1-0.

– Vieri: “Here is the truth about Moratti, the wiretapping. I was treated like I was in the mafia but I will always love Inter.”
– “Not being at the 2006 World Cup destroyed me. I suffered.”

– Inter: Marseille’s Gignac in Mancini’s sights. The club are in legal chaos and the Frenchman, contract until 2015, will not renew.

– Milan poor against the big clubs. Will the derby be the antidote? From 2011-12 only seven wins. Inzaghi tries Rami on the right.

– Italy win, but the Coach is worried. “Hard work and humility are needed or we’ll crash. We have to work together.”
– Okaka decides it (1-0) against Albania, “but now we will see each other in four months.” 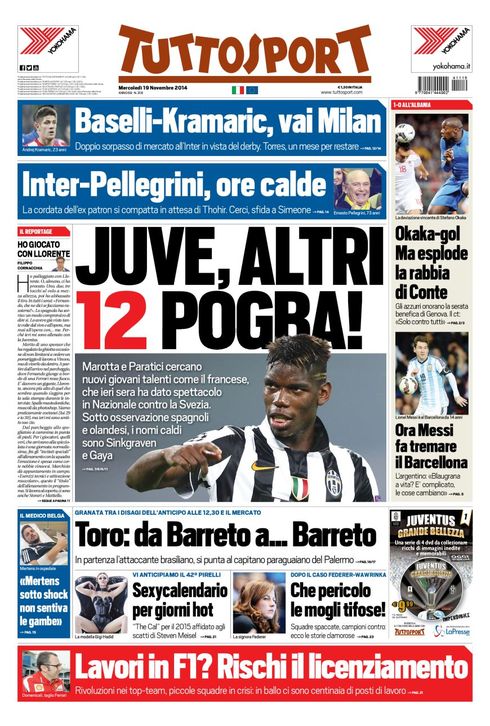 – Juve, another 12 Pogbas! Marotta and Paratici look for new talents like the Frenchman, who put on the show with the national team yesterday against Sweden.

– Spaniards and Dutch being scouted, the hot names are Sinkgraven and Gaya.

– Baselli-Kramaric, for Milan. Double overtake on Inter in the transfer market ahead of the derby.
–  Fernando Torres, a month to remain.

– Inter-Pellegrini, key hours. The group of the ex-owner compact themselves waiting for Thohir.
– Cerci, battle with Simeone.

– Toro: from Barreto to… Barreto. The Brazilian striker is to leave, they look to the Paraguayan captain of Palermo.

– Okaka-goal but Conte’s anger explodes. The Azzurri grace the benefit night for Genoa.
– The CT: “Alone against everyone.”

– “Dries Mertens under shock, he couldn’t feel his legs.”