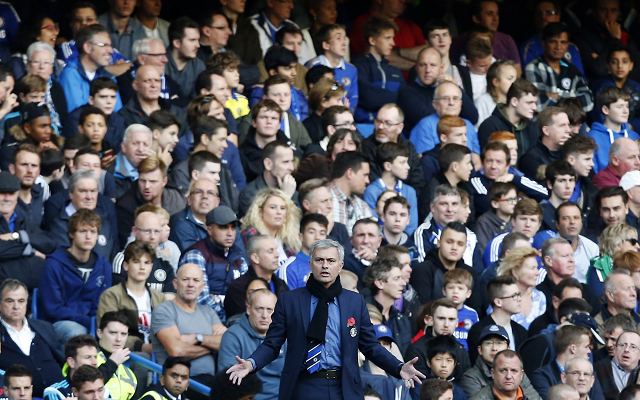 The Bridge will be signing louder than ever this weekend following Chelsea’s manager’s comments.

José Mourinho was critical of Chelsea’s supporters in the wake of the Blues’ 2-1 win against QPR three weeks ago.

He said that his side had struggled because they felt like they were playing in an “empty stadium”, and the lack of atmosphere was contributing to a poor performance on the pitch.

Since those comments the West Londoners have played away twice, at Maribor and Liverpool, and this weekend marks their first game back at the Bridge since the Hoops game.

Tim Rolls, chairman of the Chelsea’s Supporters’ Trust, says that volume won’t be an issue on Saturday, as Blues fans will respond positively to the manager’s critique.

“I would anticipate at the start of the game he’ll get a big cheer, they’ll chant his name and there will be lots of chanting. I would expect a good atmosphere,” ITV Sport quote Rolls as saying.

Mourinho’s comments sparked yet another debate about the reasons behind the poor atmosphere at many Premier League grounds.

The majority of the blame is placed on ticket prices. At clubs like Chelsea especially, prices are so high that the fans are generally older and richer, or tourists coming for a one-off game. These aren’t the young, vocal men that filled the grounds with sound in the past.

As well as changing the profile of the crowds, high prices also change their expectations. The fans who have paid well over £50 for a ticket don’t want to see their side squeak past QPR thanks to a penalty, they want £50 of dynamic attacking play.