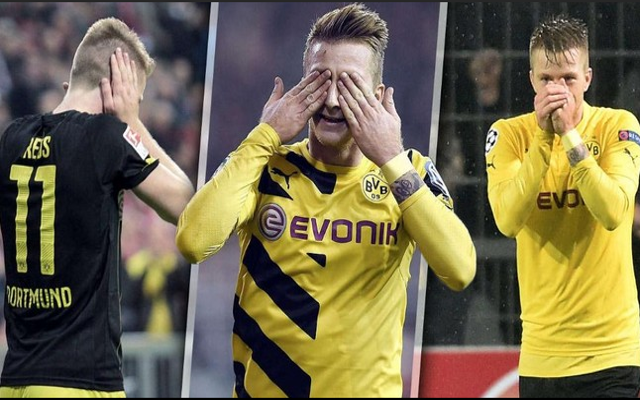 Chelsea manager Jose Mourinho has taken the unusual step of ruling his side out of the transfer race for a particular player this afternoon, report the Mail, with the Blues manager making it clear ahead of this week’s Champions League clash with Schalke that he is not interested in signing Borussia Dortmund forward Marco Reus.

Reus is believed to have a £20 million release clause in his contract at Signal Iduna Park that becomes active next summer, leading to frenzied speculation linking him with the likes of Real Madrid and Bayern Munich, as well as a host of Chelsea’s Premier League rivals including Liverpool and Arsenal.

If Mourinho is to be believed, however, Chelsea are not interested in bringing the German international to Stamford Bridge, with Mourinho denying all knowledge of any interest ahead of the Blues’ clash with former manager Roberto di Matteo, who is in charge of Dortmund’s fierce Ruhr rivals FC Schalke:

“We don’t want Marco Reus. The market is closed and the player belongs to Borussia. We have top players in this position. No secrets, I have a fantastic relationship with the Dortmund coach and sporting director.”

Mourinho’s quotes are unlikely to quell the concerns of Dortmund fans too much, however, with Jurgen Klopp’s side currently precariously placed in the Bundesliga table and, even if it is not to Chelsea, almost certain to lose their most exciting attacking player next summer.