Just who will have the misfortune of handling Arsenal’s man of the moment Alexis Sanchez?

Arsenal meet Borussia Dortmund at the Emirates Stadium tonight in a crucial Group D clash. Arsenal will still be hurting from their 3-3 horror-show with Anderlecht in the last tie of the round, losing a 3-0 lead in 29 minutes to the Belgian side. However if the Gunners manage just one point from their last two games in the group, they will qualify for the knockout stages.

Dortmund meanwhile sit confidently clear of the North London side at the top of the group. The Germans are five points clear and surely favourites to go through as the seeded team, whatever the result tonight.

We take a look at the key battles that will be taking place tonight: 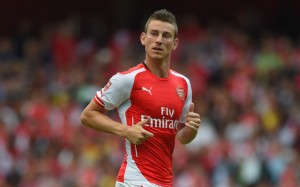 Arsenal fans will be breathing a welcome sigh of relief to see their most competent defender return to training before Wednesday night’s clash. The Gunners’ backline has been ravaged by injuries with lightweight left back Nacho Monreal attempting to deputise for the missing Koscielny to very mixed success. It’s not yet known whether Arsene Wenger will test out the France international’s achilles from the off, but you’d think he might risk him considering how vulnerable Arsenal have been to fast-paced counter attacks, Dortmund’s pedigree, this season.

Aubameyang has already broken his duck against the Gunners, scoring the second in a 2-0 win for Dortmund back in September. The 25 year old has amassed a not too shabby 3 goals in 4 matches, helping Dortmund score at least twice in their previous five Champions League matches. Dortmund will be buoyed, however, knowing they have Adrian Ramos ready to come on from the bench. The Colombian has scored with each of his three shots on target in Europe this season.